The Next Big Thing: A Global Blog Tour!

The Next Big Thing is a global blog tour (which started in Australia!) to bring awareness to authors & illustrators and their current work. Thank you to the wonderful Liza Woodruff for tagging me!
I will answer some questions about my newest book, then pass the Q & A on to three fantastic book artists.

1. What is your next big thing?
My new book: Pigs in Pajamas. 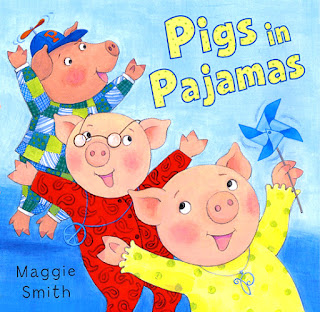 2. Where did your idea for the book come from?
I have a penchant for making up silly rhymes and alliterations and somehow I had gotten stuck on the letter P.  It became clear that lots of fun things and activities start with the 16th letter of the alphabet!

3. What genre does your book fall under?
Pigs in Pajamas is a picture book, and it might be released as a board book as well in a year or two.

4. What actors would you choose to play the part of your characters in a movie rendition?
This is pretty silly for a book like this, but here goes:
Penelope - the hostess with the mostest - Juliette Binoche
Pip - (glasses) smart, studious, kind of shy - Matt Damon
Paloma - (pink flower on her head) girly, loves to dress up - Mindy Kaling
Pammy - (purple pj's') plays piano - Holly Hunter (she really does)
Paco - (propeller hat) pretty zany, the life of the party - John Leguizamo
Percy - (pinstripes) - charming, gallant - George Clooney
Pearl - (pink plaid) - the youngest, a bit spacey, adorable - Lena Dunham 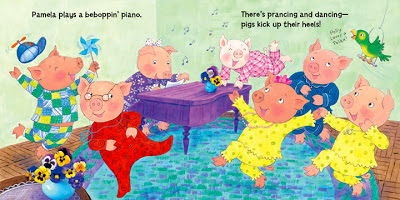 5. What is a one-sentence synopsis of your book?
A Pleasing Piggy tale, with rollicking rhymes and infectious alliterations;

Pertaining to Penelope Pig’s Pajama Party; with Plenty of hooPla,
Plus a Plethora of things (more than 75!) starting with the letter P, to PinPoint in the Pictures.